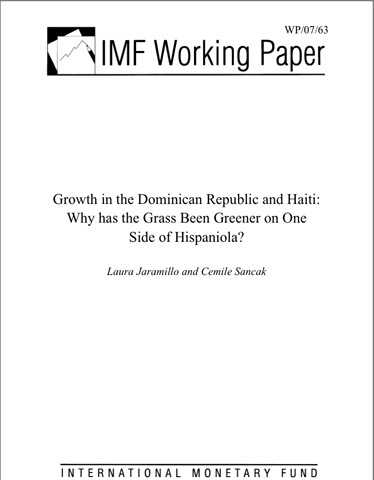 The following is a critique we did highlighted with a summary of notes from a research paper done to determine why is there such a difference in economic stability between Haiti and the Dominican Republic. Our notes are taken to point out the obvious that seems to be ignored or suppress by the researchers which happens to be an indisputable fact that the growth and economic stability in the Dominican Republic is a result of Trujillo’s presidency.
The paper is titled:

“Growth in the Dominican Republic and Haiti: Why has the Grass Been Greener on One Side of Hispaniola?”
By: Laura Jaramillo and Cemile Sancak

“The quality of institutions was poor in both countries until early in the 20th century—at the time of the U.S. military occupation—”with arguably greater political instability in the Dominican Republic”.
Here they obviously mention that Haiti has more political stability than DR prior to Trujillo.

In summary, strong similarities in the initial conditions in the Dominican Republic and Haiti indicate that these cannot explain the divergence in real incomes of the two countries since 1960. However, this finding does not imply that all conditions were identical going into the 1960s. In fact, by 1960, Haiti was already trailing the Dominican Republic in some social indicators, such as life expectancy and illiteracy rates.”
Here they’re basically saying that the economic stability they see in their focus study years beginning in 1960, has already begun prior to 1960.

“Nonetheless, we find that these differences are likely to have emerged closer to 1960 and were not inherited from the 19th or early 20th centuries. As mentioned earlier, lack of national accounts prior to 1960 does not allow us to determine the exact point in time when the Dominican Republic started to outpace Haiti”,

We find it ironic that they know the progress of DR was not inherited from the 19th or early 20th centuries (prior to Trujillo) but emerged “closer to 1960”.

“but differences are likely to have started to emerge in part as a result of the policies implemented following the U.S. military occupation. In general terms, the outcomes of U.S. intervention in both countries were akin: order was broadly restored; the countries’ budgets were balanced and debt reduced; and infrastructure was expanded, including new roads, telephone connections, port facilities, and public health and education services.

“However ensuing governments in Haiti practiced only rent-seeking behavior without efforts to maintain public infrastructure and social services, while the Trujillo regime in the Dominican Republic promoted agriculture, industry, and public works.”

Here is the reason for the advances in DR, Trujillo!!

“The next section looks at the policies pursued in each country since 1960, when national accounts became available, to shed more light on the factors contributing to the divergence in per capita real GDP.”
Trujillo 1930-1961

“Trujillo rules the Dominican Republic with an iron fist from 1930 to 1947 and indirectly thereafter until his assassination in 1961”. “Trujillo carries out programs of public works and construction. He also presses for industrial progress, and scores of factories are opened. Agricultural production improves and the economy flourishes.”

CONCLUSIONS
“This paper tries to explain why the Dominican Republic and Haiti have experienced a striking divergence in growth performance despite their broad similarities in terms of geography and historical institutions. We examine both the initial conditions and the different policies pursued in each country since 1960 in order to identify the factors that may have contributed to this divergence.
When examining initial conditions, namely geography and historical institutions, we find strong similarities between the Dominican Republic and Haiti, implying that initial conditions cannot fully explain the divergence in real incomes of the two countries.

While, by 1960, Haiti was already trailing the Dominican Republic in some social indicators, differences were not inherited from the historical legacies of the 19th or early 20th centuries. Although lack of national accounts prior to 1960 does not allow us to determine the exact point in time when the Dominican Republic started to outpace Haiti, disparities are likely to have started to emerge in part as a result of the policies implemented in each country following the U.S. military occupation.
The panel regression and case study approach allow us to conclude that policy decisions since 1960 have played a central role in the growth divergence between Haiti and the Dominican Republic. In general, structural policies have been the key determinant of growth in both the Dominican Republic and Haiti, followed by political stability and stabilization policies. In particular, we find that the Dominican Republic has consistently outperformed Haiti and LAC in terms of implementation of structural measures, stabilization policies, as well as political stability. Meanwhile, Haiti has lagged the region in implementing structural policies, while being subject to numerous political shocks that have severely affected its growth performance.”

“While this paper identifies the kind of policies linked to growth performance in both countries of Hispaniola, future work would be needed to understand why decision makers in the Dominican Republic chose and were able to implement superior policies to those in Haiti.” Further research could also provide insight into the sources of the persistent political turmoil in Haiti, “as well as to the circumstances that allowed the Dominican Republic to surmount the political instability of the 19th and early 20th centuries.”